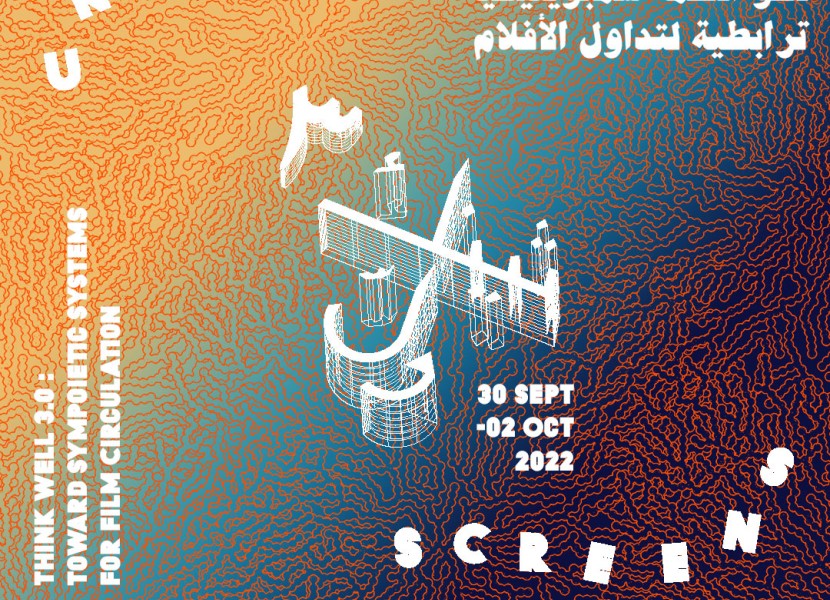 The Network of Arab Alternative Screens (NAAS) and SAVVY Contemporary’s United Screens are pleased to announce Think Well 3.0: Towards Sympoietic Systems for Film Circulation, a symposium which will take place at Flutgraben Berlin from September 30 to October 2.

Think Well 3.0 continues to take cue from reflections on film cultures powered by community practices. Over three days film practitioners and system thinkers will come together to imagine tools, methodologies, value metrics and network logics for the circulation of alternative cinema and video art. Flutgraben will be our playground to experiment with simulated scenarios, marked with rich discussions, and moments of collective decision making. Think Well 3.0 takes on an immersive game format to help us address issues common and urgent to all of us, and weighs on our collective intelligence and imaginaries to mandate – sympoietically – for a film circulation ecosystem that encompasses a pluriverse of stories.

Think Well is a vocal resistance coined by South African writer, playwright, filmmaker Puleng Lange-Stewart diverting from etymology which resonated with overtones of crisis and desperation (think tank). She urges us to move towards a “well” where we can find respite, collectively. Believing that our groundwaters are connected, Think Well initiates flows between cinema practitioners and filmmakers from the South to imagine a new film ecosystem powered by community-led technological imaginaries.

The event has limited capacity, to attend physically, please register via [email protected] by letting us know a bit about yourself and your interest in joining.

Established more than ten years ago, NAAS champions long-term collaboration and solidarity among a growing constellation of initiatives and spaces that maintain community around film. With a belief in the urgency of alternative narratives and the experience of watching film collectively, NAAS provides opportunities and resources for the cinema sector to cultivate critical thinking and dialogue among audiences across the Arabic-speaking region.

UNITED SCREENS is a long term research, networking and exhibition project, conceived at SAVVY Contemporary, Berlin, that intends to create a platform through which a network of community cinema programmers can be enabled to screen quality alternative cinema and video art. These films would be hosted on a de-centrally curated database of alternative cinema/video art. We are working towards a new technology-based platform to distribute independent films produced across the Global South, comprising of African and Asian continents at large, Latin America, Eastern Europe and Indian subcontinent.

Drawing from the combined spirit of the anti-neocolonial Third Cinema proposition of South America, film cooperatives of Indian subcontinent, avant-garde movements of Eastern Europe, as well as, decolonial resistances of the African continent, we at SAVVY Contemporary were inspired to look into cinema practices active in the contemporary “Global South”, and inquire into the challenges and opportunities in their transnational exhibition.