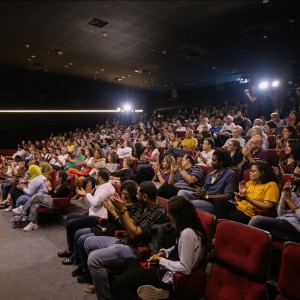 Zawya is a Cairo-based independent cinema platform with a mission to showcase and circulate quality films. Following six successful editions of the Panorama of the European Film, Zawya Cinema was established in March 2014 as one of the first independent cinemas in Egypt, aiming to fill a much-needed gap in Cairo’s cinematic and cultural scene.

With a program split between theatrical releases and curated programs, Zawya screens a diverse selection of films from across the globe, varying from feature films, shorts, documentaries, to experimental works and retrospectives. Zawya’s program also focuses on local independent films to encourage and promote the work of young Egyptian and Arab filmmakers across different platforms. In addition to its regular program, Zawya organizes two annual film festivals: the Panorama of the European Film and Zawya Shorts.

In 2015, Zawya launched its distribution arm, aiming to create an alternative distribution model bridging the gap between independent films and their audience through targeted and encompassing strategies. Zawya Distribution works to give films a long shelf life, traversing past the theatrical release, with a strong exhibition on TV channels, VOD and other ancillary forms of distribution including non-commercial releases.

In 2016, Zawya organized an Art-house Cinema Management workshop, through which weekly screenings and film programs emerged in three other cities: Alexandria, Port Said and Ismailia. This activity lasted from 2016 to 2019.

Following four successful years of operating a single screen in Cinema Odeon, Zawya relocated in September 2018 to Downtown’s Cinema Karim to manage two screens with a combined capacity of 387 seats.

Zawya is a member of the Network of Arab Alternative Screens (NAAS) and is supported by Misr International Films (MIF) and New Century Cinemas.