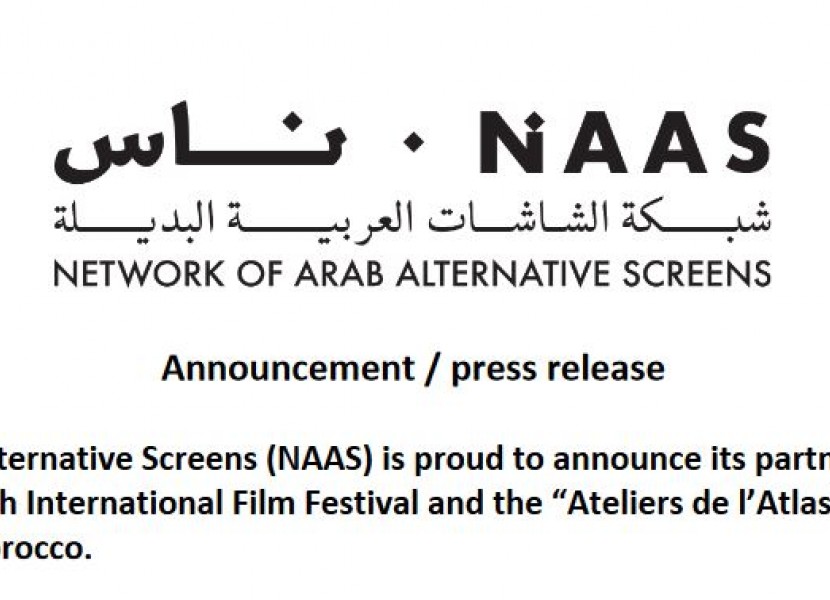 The Network of Arab Alternative Screens (NAAS) is proud to announce its partnership with the 2018 edition of the Marrakech International Film Festival and the “Ateliers de l’Atlas” from December 2-6, 2018, in Marrakech, Morocco.

The network will hold its fourth General Assembly at the Marrakech International Film Festival, on December 3, 2018.

NAAS will also contribute with a number of activities to the “Ateliers de l’Atlas”, a creative and professional platform launched by the festival this year to support filmmakers and to provide a place for exchange between international professionals and regional talents.

A jury of NAAS members will award a prize for film circulation to one of the six films in post-production presented during the “Ateliers de l’Atlas”. The prize amounts to $3,000 and will be issued to the NAAS member spaces to invite the filmmaker or a crew member to present their film and to facilitate its circulation among Arabic-speaking countries.

In addition, each of the six directors participating to the “Ateliers” will receive a consultancy session provided by the NAAS exhibitors and distributors.

Read about the 2017 NAAS prize for film circulation

The closure of cinemas in the African continent in the recent past has been widely perceived as the end of an era; a closer look, however, reveals otherwise. Beginning with the presentation of the recently NAAS-published study Mapping Cinema Audiences: Egypt, this roundtable brings together participants actively engaged in mobilizing new film-going audiences.

December 5 from 2pm until 4pm at the Beldi Country Club.

Rojeh Khleif at Radic...
3 weeks ago

A Stanley Kubrick Ret...
1 month ago

NAAS is proud to shar...
3 months ago

COPEAM Interview with...
3 months ago