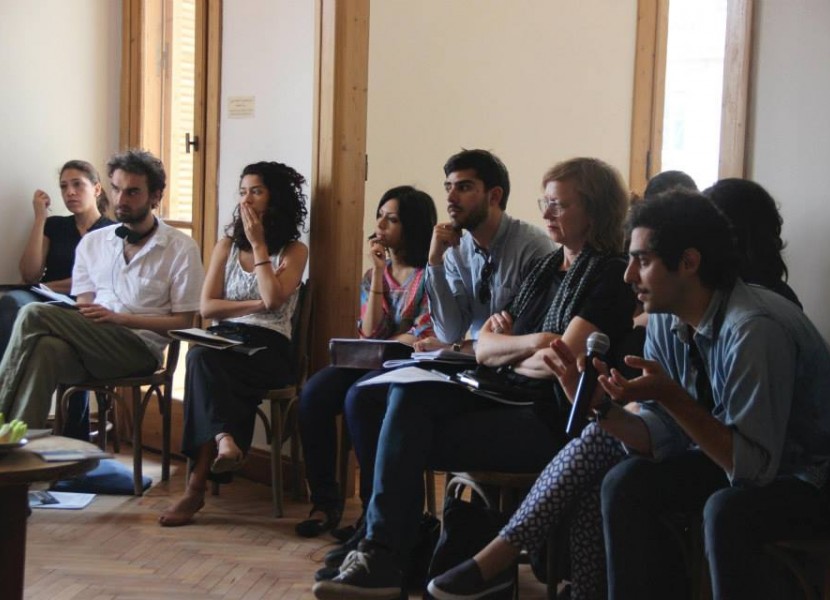 The second Arab Arthouse Cinema Workshop held by NAAS took place in Cairo between the 4th and 8th of June 2015. The workshop was co-organized with Cimatheque – Alternative Film Centre in collaboration with Zawya and ArteEast.

It was attended by over 30 participants from Bahrain, Egypt, Jordan, Lebanon, Morocco, Palestine, Sudan, Tunisia and UAE, selected by an independent committee and representing a variety of arthouse cinemas, cine clubs and multidisciplinary spaces in the region.

A number of selected participants from Palestine, Syria, Algeria and Tunisia were not able to join the workshop because they were either denied the Egyptian visa, or were not granted the visa in time for the workshop.

This second edition was geared primarily towards programming of alternative film spaces. The focus was on understanding the exhibition market landscape, presenting case studies that highlight the challenges and possible solutions of alternative programming, mapping the different kinds of content available for programmers and curators in the network and conceiving of possible collaborations among the participating spaces in the area of film curation and programming.

The directors and programmers of the 3 spaces shared with participants their programming strategies, financial models, organizational structures, audience building mechanisms and the different kinds of challenges they face in running an alternative film space in their cities.

In the last two days of the workshop, a series of panels and open discussions were organized under the theme “How do I see it, and where?” with a focus on the challenges of programming alternative content in film spaces and arthouse cinemas in the Arab region. Throughout the two days, we engaged in conversations with programmers, filmmakers, archivists, and representatives of Arab and International film institutions, funds, festivals and independent initiatives about the challenges and opportunities that exist in different types of content, including contemporary Arab films, Arab classics, international cinema, documentary films and archives.

During the panels, which were held at Rawabet Townhouse and opened to the public, particular attention was paid to the role of spaces and programmers in making films available, and the general issues faced by the circulation and distribution of films that have had little or no opportunity of being shown to audiences in the region. At the end of the workshop, participants spent a few hours brainstorming possibilities of getting the best use of out of the workshop content, and areas of collaboration whether through projects that should be taken on by NAAS or conceived directly among the network members.

In addition to the sessions, panels and case studies, two screenings were organized in in conjunction with the workshop. The first took place at Cimatheque and was a screening of a selection of silent films by Moroccan filmmaker Mohamed Osfour curated by Léa Morin. The second screening, Scenes from Another Century was a collection of silent films of the Arab World from the early 20th century from the BFI National Archive, alongside classic British propaganda films produced in Arabic. The screening took place at Zawya and was curated by Robin Baker (Head Curator of the BFI National Archive), and the film projection was accompanied by live electronic music from Processions Towards the Unknown.

This workshop was supported by the Embassy of the Netherlands in Cairo, the British Council, the Institut Français and Goethe Institut.

First Edition of the...
3 years ago